With over 50% of Turkey’s population living in cities, and that figure set to accelerate rapidly in the next century, urban rail development is a national priority.

Construction and further expansion of metro systems, tramlines and other light rail systems is ongoing. As expected of infrastructure projects of this type, the costs are high too. With that in mind, let’s take a trip around the Turkish urban rail sector to see what’s happening in this vibrant market. 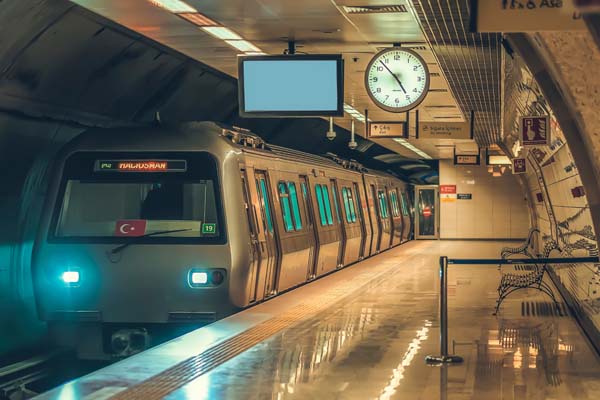 As much as $46bn will be spent on upgrading Turkey’s entire rail network between now and 2023. Light rail systems are a big part of this spending, with metro lines factoring in heavily into nationwide plans.

As of January 2018, work on at least 18 branches is underway in Istanbul alone. Turkey’s largest city is a major source of infrastructure projects, so it stands to reason that it retains a healthy appetite for cutting-edge underground lines.

These include: Hyundai Rotem, one of the major rail companies confirmed for Eurasia Rail 2019, is supplying rolling stock to Istanbul metro projects. The South Korean firm inked a deal in 2017 for 120 metro units at a cost of $150m.

Away from Istanbul, a new automated system is coming to industrial hotspot Kocaeli with a price tag of $885m. The new line, which saw building work start in October 2018, is a major undertaking. The route will connect Gebze, a major centre of industry, to Darica, two cities located on the coast of the Marmara Sea.

According to the Kocaeli Metropolitan Municipality, project originators and funders, the line will cover 15.6km. 12 new stations are slated for construction as well. Each train will consist of four wagons, holding a capacity of 1,080 passengers each.

What’s more, the European Bank for Reconstruction and Development (EBRD) is loaning Izmir $90m for construction costs on expanding the city’s 250km metro network. 7.2km of new east-west facing track on the Fahretting Altay-Narlidere line. An additional $26.6m has been allocated by the EBRD for rolling stock procurement too.

The above projects are responsible for over $1.9bn in investment, showing Turkish commitment to urban rail investment.

This is being complemented by a number of tram projects throughout Turkey.

Tramlines in Turkey are a viable alternative to busses and cars in major metropolises. Intelligent Report, for instance, calls Eskisehir’s as a “textbook solution to urban transportation requirements”, by Intelligent Transport.

The tramway, operational since 2004, carries over daily 125,000 passengers, ably connecting two university campuses, the city centre, and two hospitals, as well as Eskisehir railway station and an arts complex.

Now, Turkey is rolling out further tram projects in an attempt to replicate Eskisehir’s success.

In September 2017, the Turkish Ministry of Transport announced that two cities will be getting fresh tram routes over the next couple of years. Erzincan and Erzurum will join he list of Turkish cities currently enjoying tram networks.

As much as $73m has been spent on feasibility studies for both new lines so far.

Where urban transport is slated for further work, Istanbul is never far away. Construction of a new tram line there began in May 2017, and is slated for completion in the same month in 2019. Istanbul’s latest tramway is 10km long, connecting the southern edge of the Golden Horn to deeper into the city.

Costs are expected to total $173.3m for full project delivery.

While high-speed rail may be stealing the headlines, urban transport investment is an integral part of Turkey’s expensive national rail overhaul.

As such, it presents significant opportunities for suppliers of rolling stock, signalling and control systems, plus further infrastructure necessities, including ticketing systems and so on.

In Turkey, there is one place you can find them: Eurasia Rail.

Major rail companies like Siemens, Alstom, Bombardier and Hyundai Rotem have used the show to meet clients and grow their sales across Eurasia. Now you can do the same.

For more information on how Eurasia Rail can help your business get a slice of Turkey’s $46bn railway spending regime, contact us today
Back