Across Turkey, the tracks are being laid for a complete rail revolution. Fresh routes, both high-speed and conventional, are being developed, and infrastructure is getting a huge upgrade. Rolling stock, too, is in national focus right now, with billions in spending on its way.

Demand for new train sets, rail cars, and wagons is increasing throughout Turkey. Activity covers both modernisation of existing fleets and tenders for brand new locomotives. This is a multi-billion-dollar endeavour, one reliant on internationals’ engineering experience and expertise to be fully realised.

Over $2bn is being spent on modernising Turkish fleets of high-speed trains, urban rail vehicles, such as trams and metro cars, freight wagons and locomotives. Improving the nation’s railways is part of a complete national transport overhaul, so Turkish authorities aren’t being thrifty when it comes to this massive project.

High-speed trains make up the bulk of internationally-focussed tenders. Plans are afoot to buy 106 new units by 2023, 10 of which have already been purchased. Siemens won a tender to supply 10 Velaro units to TCDD, Turkey’s national rail operator, in January 2018 at a cost of just shy of $400m.

That leaves another 96 HST sets to be ordered. Given Turkey is in the throes of a huge high-speed construction campaign, the impetus to tender these out is getting stronger and stronger every day. The original order was due to be made in April 2018, but has since been delayed.

Hyundai Rotem, Bombardier, Alstom, Siemens, CAF and China’s CRRC are amongst those competing for Turkey’s high-speed prize. Under the terms of any deal, however, the winning supplier will have to work with Turkish domestic fabricators to provide technology transfer for local manufacturing.

İsa Apaydınm, Director General of TCDD, has laid out the structure of Turkey’s high-speed procurement plan:

• 106 new units to be bought by 2023
• 10 sets to be funded by an IDB loan
• 1,889 km long high-speed railway will be build.
• 150 New Generation National Freight Wagon Projects successfully completed by TUDEMSAS 2017 and 2018.
• 60 train sets will be produced in Turkey through technology transfer with a 53% localisation rate

The remaining 16 units will be produced in a new factory in Turkey with a minimum 74% localisation rate through technology transfer.

This is partly why the initial tender has been delayed. The complexities of technology transfer, and provisions for future support from the supplier, must be ironed out before any orders are made. Of the competing rolling stock manufacturers hoping to get a slice of this spending, Alstom and Hyundai Rostem have the most potential. Alstom has previously struck technology transfer agreements with South Korean rail operators. In fact, Hyundai Rostem’s current HST offering is based off of Alstom tech.

Freight locomotives and wagons in focus in Turkey

By the close of 2018, Turkish rail companies will have purchased at least 500 new locomotives to beef up existing fleets, as well as replace out of date units. For context, national freight company TCDD Tasimacilik runs a fleet of over 400,000 wagons – more than half the available rolling stock in Europe alone.

Earlier in 2018, the company did not register 3,500 old or unused wagons. 639 freight cars were bought into replace older stock. TCDD Tasimacilik’s replacement programme means it has slashed the average age of its units to 17 years old. However, there is still some way to go until extant vehicle pools are up to standard, hence why more train sets and wagons are being purchased across 2018.

Liberalisation of Turkish railways is also playing its part in increasing demand for freight trains and related rolling stock. Körfez Ulaştırma, the nation’s first private operator, has placed orders for 5 of the locally-manufactured General Electric Powerhaul diesel locomotives, doubling its fleet size in one move. The GE trains will be used to carry ores and metal products to and from Körfez Ulaştırma’s refineries. 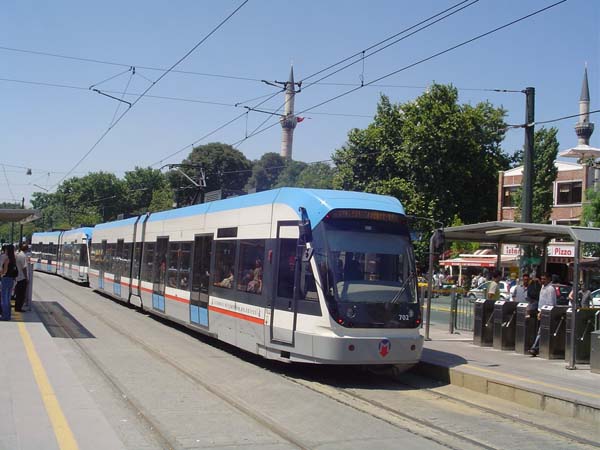 As mentioned above, a few internationals are already manufacturing train sets in Turkey, alongside partners like Tulomsas. General Electric is one such example. Its Powerhaul locomotives are built at Tulomsas’ production facilities, making it easier for units to reach their work sites across the network. The Powerhaul is currently the only mainline diesel locomotive being built in Turkey.

Tulomsas has also been building Hyundai Rotem train units under license since 2014. The E68000 electric train, the single electric locomotive being fabricated in Turkey today, are ran by TCDD. TCDD will be purchasing 80 total units, replacing now 20-year-old Toshiba units. Interestingly, electric parts for the E68000 are supplied by Skoda and imported from the Czech Republic.

Localisation is an integral part of Turkey’s rolling stock deals. In urban rail, for example, 51% of vehicles must include local content. Four current plants, featuring varying degrees of localisation, are running in Turkey at present.

Five years remain until Turkey is set to complete its national railway overhaul. For the next five years, and into way into the next decade beyond that, the opportunities for foreign companies to supply rolling stock will remain healthy. This could be either pure unit exports, or tie-ins with Turkish fabricators.

Many billions of dollars are on the table in purchasing budgets, because Turkey’s rail ambitions are huge. In 2023, the nation celebrates 100 years as an independent republic, so it’s brimming with renewed gusto regarding its national infrastructure, with railways hogging the spotlight.

Turkey is ripe as a market for foreign manufacturers of train sets, HSTs, urban rail, and pretty much all rail technology. You can discover your selling opportunities at Eurasia Rail 2019.

It’s the one and only event of its kind in Turkey and Eurasia, and third largest worldwide.
Back